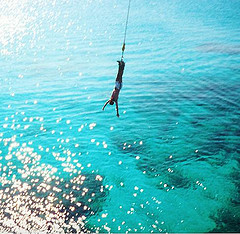 On the occasions I’ve watched The Biggest Loser, I couldn’t help but think it was a terrible example for showing people how to lose weight. Sure the candidates had amazing, dramatic results, but the methods were extreme and not exactly something the everyday Joe or Jane could do. In fact, instead of inspiring people, I bet the show has made a number of people think losing weight would be so hard — and frankly so painful — that they couldn’t possibly be successful.  As I become more involved in the world of green living, I am coming across a number of examples of extreme green living that remind me of The Biggest Loser — both inspiring and deflating at the same time.

First up, No Impact Man. No Impact Man became a media figure when he embarked on this year-long journey, explained in his own words: “For one year, my wife, my 2-year-old daughter, my dog and I, while living in the middle of New York City, are attempting to live without making any net impact on the environment. In other words, no trash, no carbon emissions, no toxins in the water, no elevators, no subway, no products in packaging, no plastics, no air conditioning, no TV, no toilets….” This was a hugely noble undertaking and he certainly raised awareness and helped many people, myself included, become inspired to reduce environmental impact. But at this extreme level, it wasn’t sustainable.  Even No Impact Man had to do it for only a finite period of time.  While his current impact certainly remains far below what it was prior to his experiment, he’s backed off a bit, following a plan that for him and his family is sustainable for the long-term.

Next up, hypermilers. The key objective of hypermilers is to increase their miles per gallon by changing how they drive their car. There are six main steps to hypermiling:

Many of these steps sound simply like safe prudent driving advice.  Others (avoiding long stops and traffic congestion) can be merely impractical. So why do I say hypermiling can be problematic?  Because there is a segment of hypermilers that take these practices to extremes, extremes that become dangerous. So I’m willing to follow the basic idea of moderate driving (I’ve been experimenting with keeping my RPMs under 2000), but I won’t practice any of the dangerous techniques like drafting behind semi-trucks or turning off the engine and coasting downhill. And neither should you!

And finally for this post, off-the-grid-ers. Off-the-grid-ers strive for complete independence for their home energy needs.  Again, on the face of it this sounds like a great idea.  Who wouldn’t want to be completely independent energy-wise?  The challenges here are a fewfold: 1.  Doing this is typically pretty expensive, cost prohibitive for the vast majority of people, 2. For most of us living in an urban or suburban setting, it probably isn’t fully possible to achieve off-the-grid independence, and 3. Off-the-grid-ers don’t feed back into an energy grid, which means some of their surplus energy could go to waste. As Derek and I think about our goals for a future solar installation, we are hoping to become largely independent, but will do a grid-tied system so that we can feed any surplus energy back into the collective energy grid. For others, the solution will require that local utility companies become greener, and that green energy programs become the standard for everyone.

As Derek and I shed the weight of heavy carbon usage, we want to do so incrementally, one step at a time, becoming our long-term way of living. We are striving for sustainable sustainability. We plan to avoid becoming one of those inevitable biggest losers who make a valient, heroic effort to get to their goal only to end up gaining back all the weight.

This entry was posted in Energy usage and tagged Green living, hypermilers, No Impact Man, off-the-grid, sustainability, The Biggest Loser. Bookmark the permalink.