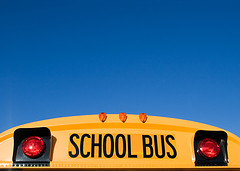 With the start of school, our effort to carpool is falling apart. Previously, our two kids attended the same school. This made it very easy for Derek and I to drop them off at their school and then head to the office. But the start of kindergarten is making our weekly drop off/pick up schedule much more complicated and carpooling isn’t going to work. You see, in an effort to avoid having to put our daughter into after-school care, Derek and I are now working split schedules. He’s going into the office very early so he can leave at 3:00 to do the kindergarten pickup. I am doing the bus drop off and daycare drop off in the morning, meaning I will need to stay at the office later in the day. We’ve been talking about a plan to leverage the commuter bus system run by the company we work for to lessen the impact, but the logistics and timing might be difficult.  One small saving grace is that we are having our daughter take the school bus instead of making an extra trip to drop her off at the school. At least she’s carpooling right now. To keep track of how much we are driving, I’ve created a mileage log page.  After we get settled into our new school routine, we will see how we can shave our weekly mileage down. 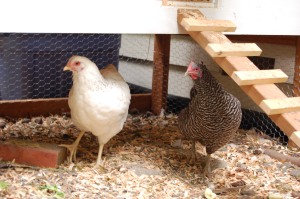 In brighter news, we’ve expanded our flock of chickens from four to six.  We added a Delaware and a Barred Rock, Whitey and Salty respectively.  Blondie, Golden, Ebony, and Blackie haven’t been too thrilled about the new additions and have been picking on the new arrivals a bit. I didn’t realize how quickly chickens would work out a social system (pecking order) and how this all has to be worked out anew when new chickens are introduced.  I did a little research and people have all sorts of ideas about how to integrate flocks.  Today, I gave Salty and Whitey some time alone in the run and then let them free range (within the fenced in side yard) with the rest of the chickens.  The pecking is getting better, but I fear poor Salty and Whitey might be doomed to be at the bottom of the pecking order. Hopefully this will all settle down over the next few days and we’ll start seeing some eggs soon. 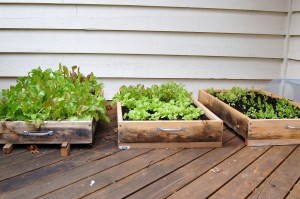 Also in brighter news, here is a current shot of the lettuce beds we built earlier this summer.  I’ve been “cut and come again” harvesting the first bed for over a month now.  I’m pretty sure that these three boxes can keep us in a constant supply of lettuce.  When the weather turns really cold, I’ll move the boxes to the greenhouse.  Speaking of the greenhouse, we’ve been busy doing our first fall planting in the greenhouse raised beds.  So far I have planted carrots, peas, spinach, chard, onions, broccoli, and radish.  I’m also trying out some greenhouse-friendly cucumber seeds.  Arriving soon will be garlic bulbs and new raspberry canes.  The raspberries will be planted in a raised bed as well (although not in the greenhouse).  P~ at A posse ad esse recently had a great post about the benefits of fall planting.  He’s sure right that cool weather crops germinate must faster for the fall planting than the spring planting.  The little broccoli and pea seeds I planted just four days ago have already started peeping through the soil.  What a great way to start the fall season. Happy gardening.