Gardening has been a part of my life since I was very little (probably why I’m not nearly as into it as Sandy – when weeding is part of your chores, the glamour fades a bit). As referenced in the Portland Raised Beds posting, my parents have been gardeners for quite a while. Not such a stretch when your father is a (retired) landscaper and mother was raised in the country (with grandparents who were nursery owners and avid gardeners to boot). In fact, what Sandy and I have been doing with regards to the garden and the livestock is rather similar to my maternal grandparents’ mini-Farm in Yoder. In this case, those who learn from history are better able to repeat it. 🙂 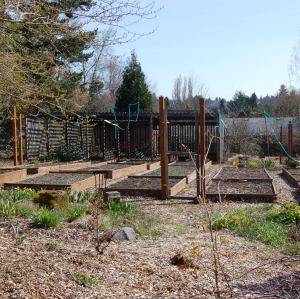 Originally, my parents planted everything directly in the ground – no raised beds. Western slope West Hills soil is very clay-heavy so they added a lot of Zoo Doo (my dad worked at the Portland Zoo for a period), compost (40 years of vegetable peelings, fruit cores, eggshells and other kitchen waste), various other forms of manure and a lot of rototilling. As such the ground is very fertile now – unfortunately, the weeds love it (hence the aforementioned chores) as well as the moles.  As they’ve gotten older, and lost the low-cost manual labor of me and my sister, they’ve realized that it is much less work to plant a majority of the vegetables in raised beds (easier to control the weeds and keep out the moles).  However, there is still a fair amount of planting outside of raised beds (corn, for example and other crops that aren’t as impacted by weeds) taking advantage of that rich soil.

Unfortunately, this has led to the most recent group of pests – deer and bunnies.  As such, whenever we come to visit our dog Gala gets a good workout putting the fear of god into the local fauna.

In addition to all the annual and perennial crops, my parents also have a lot of fruit-bearing bushes and trees.  Just a sample:

Growing up we had the blueberries, raspberries (about 2x what they’re currently growing), apples (a 100+ year old King apple tree, a Gravenstein, and an Early/Yellow Transparent – now sadly all gone), pears (a generic pear tree – Bartlett perhaps?) and cherries (Pie and Rainier).  I hope some day that our ‘orchard’ will be as fruitful (pun intended) as what I had growing up.

Incidentally, the odd structure in the background of the photo is a 20+ year old lath-house that my father uses to cultivate rhododendron, azalia, maple, dogwood and other seedlings.  In fact, after tasting the eggy goodness of our experiment with raising chickens, he’s been considering raising his own flock in it (if he can convince my mother).

This entry was posted in Gardening and tagged composting, Portland, raised beds. Bookmark the permalink.