Why I am saying No to the Prius 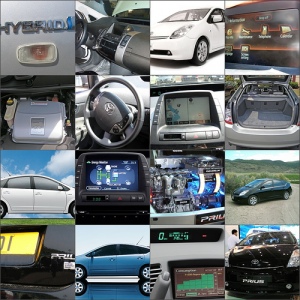 I know I have some bad preferences.  I’ve already explained my issue with the thermostat and my preference for 72 degrees.  Next on my list:  I love my Volvo V70 and won’t trade it for a Prius.  On the freeway, my Volvo gets about 30 mpg.  That’s respectable.  City driving is not respectable.  Right now, I am averaging 21.5.  I know the Prius would do a lot better than that, but here’s why I am not buying:

1. My Volvo isn’t very old.  I only have about 40K miles on the car and it seems like a waste to get rid of it while it is still useful.  If I trade it in, someone else will drive it around getting the same mpg and won’t exactly have pulled an inefficient car out of the system.
2. I have little kids and they have bulky stuff.  When you have two jumbo car seats in a vehicle plus a dog that likes to ride around everywhere, plus a stroller, plus groceries, you need a little extra space for the stuff that needs to be hauled around.  The Prius would probably be OK in this regard, but the Volvo is awesome.  Luckily, the kids will be graduating from most of their truly bulky stuff in the next few years.
3. My husband and I have doubled our fuel efficiency by carpooling to work.  It’s pretty convenient since we work for the same company.
4. But here is the main reason. I want something better than the current generation hybrid.  I want more than the 45 mpg the current gas/electric Prius has to offer.  I want a vehicle that is all electric, or if a hybrid, then one that relies on the electric technology even more, bringing mileage into new, hopefully triple digit, territory.

There are all sorts of interesting concept cars being developed.  Today, Nissan announced a new electric car concept that will be available in 2010. I’ve also been following the news on the Volvo ReCharge, which is aiming to rely heavily on electric and give triple digit mpg. Chevy is working on an electric car called the Volt.  The one car concept I’ve seen that meets my 4-door plus storage requirement is the Zap-X Crossover.  If it makes it to market, it also won’t be until 2010.  And the MSRP is $60k, which is more than I would want to pay for a car.

Some of this thinking might be wrong-headed, but this is my position right now.  Every time a new green concept car is announced, I’m all over the story.  I am very interested in green vehicles and fully expect to shift to a green vehicle in the next five years.  The Toyota Prius is a great car. It was the proof of concept that really kicked off the green car movement.  It created demand and there is more R&D going on in this area than ever.  So, thank you for this Prius, but no thanks for now.

12 Responses to Why I am saying No to the Prius